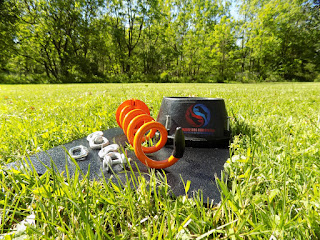 When it comes to a Large Dog or XL Breed dog, especially Pit Bulls, Huskies, German Shepards and other strong dogs, there is only one dog tie out that should be considered , the Double Dog Run System . The best dog tie out for large dogs needs to have strength, security and made to hold large amounts of pull force or pounds of pressure exerted when pulling on a fixed object. Let’s go over some facts that are important to know. When deciding on the best tie out for Pit Bull or large dog.  How much weight can your average Pit Bull pull?   According to sources your average household Pit Bull can weigh anywhere from 40 - 60 pounds and can typically pull 2 - 3 times it’s body weight.   For this example, let’s use a 60 pound Pit Bull and say it can pull 3 times its body weight. That means a large, 60 pound Pit Bull can pull approximately 180 pounds.   How much pull force does a dog have  vs a human? Looking into other studies it is said that a dog CAN exhibit 350 pounds of pressure!   Looki
Post a Comment
Read more
More posts

Two Dog Tie Outs
Have two dogs or more? As the experts and inventors of the U.S. Patented Double Dog Run System, we are her to help you to understand our products; and, in the near future, other dog products we recommend. We will be posting dog product reviews, tips for dog owners, and more! Our specialty, however, is dog tie out stake systems. What is the best dog tie out system for two dogs? The Double Dog Run heavy-duty, anti-tangle dog tie out stake can handle one or two pets of the same or opposite size for small to XL breed dogs.